In September, Edmonds City Councilmember Kristiana Johnson responded to citizens’ concerns about a public records request she made for email addresses of subscribers to the city’s Update on Edmonds newsletter and city news releases.

“I’ve never made a public records request before,” Johnson told My Edmonds News on Sept. 22 after some readers began complaining about the request. Those readers had received an email from the City Clerk’s office, which told those on the city mailing lists that anyone wishing to not have their information disclosed would need to seek a court injunction prohibiting the release of that record.

Johnson, who explained that she intended to use the email addresses to inform citizens about her re-election campaign, later decided to withdraw her request.
Turns out, though, that the city’s online system — which automatically logs all public records requests and makes them public for everyone to see — also captured an earlier request that Johnson made, about her campaign opponent, Josh Thompson.

That request was made Aug. 25, 2017, and asked for “Any Public Hearings, especially related to Hwy 99. Search Joshua (Josh) Thompson, aide to Stephanie Wright.” Thompson works as a legislative aide to Wright, a Snohomish County Councilmember who represents Edmonds.
Another reader had alerted us Monday to the discrepancy between the date of Johnson’s Sept. 22 statement — “I’ve never made a public records request before” — and her earlier Aug. 25 request.

My Edmonds News tried to reach Johnson by both phone and email for a response to the discrepancy, but the councilmember so far has not replied. We will update this story with her reply if it is received.

The situation serves as a good reminder for all those who make public records requests. Once the city receives such a request via its Public Records Request Center, the request itself becomes a public record of the city and is available for all to see on the city’s website. That can prevent duplication of staff efforts because a request that someone makes may already have been asked — and fulfilled — by the city before.

The system, which uses GovQA software, was approved by the city council as part of the city’s 2017 budget and went live on May 1. “We went to that system for its automation and workflow capabilities,” said City Clerk Scott Passey. “It streamlines our workflow, sends auto-reminders and updates to staff and requestors, and a whole lot more.

“It basically automates what was formerly a manual system,” Passey said, adding that the Edmonds Police Department also recently implemented the same system for its records requests.

“Needless to say, many cities are seeing the value of implementing web-based request portals because they’re effective, efficient, and facilitate compliance with the (Washington State) Public Records Act,” he said. 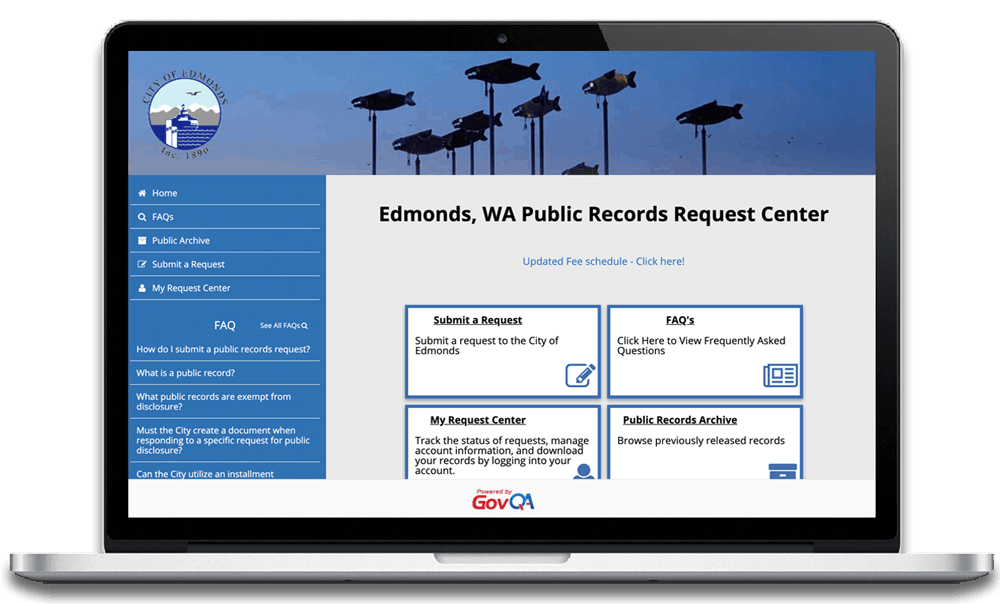