Following the widespread civil unrest in 2020, states make policy changes with regard to the public’s ability to access police personnel and misconduct records.

For years, the Niagara Falls Police Department has sent out police reports on a daily basis to news organizations. These reports were then redacted by each news outlet and published as individual articles or as part of a crime blotter.

“Based on a review of NFPD’s process for sending daily reports, it was determined that this information should have been supplied via FOIL requests only,” said City of Niagara Falls Public Information Officer Kristen Cavalleri.

The City of Niagara Falls says that such reports may be available to those who submit a FOIA request only.

Join GovQA’s PiPRIndx Webinar on February 16 to learn about the 7 figures that compose the PiPRIndex, and how to Quantify Complexity in Public Records.

Register for the Webinar

Lawmakers took early steps in that direction Thursday [Jan. 22] as the Senate Judicial Proceedings Committee heard hours of testimony on a slate of bills.

Among the bills considered was “Anton’s Law,” a statute that would allow police agencies to release misconduct records and investigations to the public under the state’s Public Information Act. These records are currently protected as “personnel records” that cannot be released to the public.

Sen. Jill Carter, said Anton’s Law still allows for police misconduct records to remain private in some circumstances, such as if the records would cause an invasion of privacy or interfere with a law enforcement proceeding.

Police transparency in the spotlight during [New Hampshire] Senate hearing

Senate Bill 39 would directly exempt any information in an officer’s personnel file from becoming public under the state’s right-to-know law, which allows citizens to request and receive government documents. Currently, police personnel files can only be disclosed if there is a compelling public interest, a determination that can only be made by a judge.

Top officials at the Michigan State Police have been using text messaging encryption devices that can put their internal communications out of the reach of the Freedom of Information Act and legal discovery, according to admissions made by the MSP made in a civil lawsuit.

The use by top MSP officials of the encryption devices — under which text messages, once deleted, can leave no record on either the phone or the state of Michigan server — was disclosed recently in a federal lawsuit brought against Gov. Gretchen Whitmer, Col. Joseph Gasper, who is the director of the department, and the MSP.

Introducing the ONLY Index that tracks the growing complexity trend in public records for state and local governments; the Peers in Public Records Index (PiPRIndex).

Join Jen Snyder on Feb. 16 at 1PM Central as she moderates a discussion around the first-of-its-kind Peers in Public Records Index (PiPRIndex): a historical marker that quantifies predictable growth (or retraction) in complexity for public sector organizations managing Public Records Requests.

Our panel will discuss each of the 7 figures that compose the PiPRIndex, and how these figures represent a broader trend felt by most SLGs. 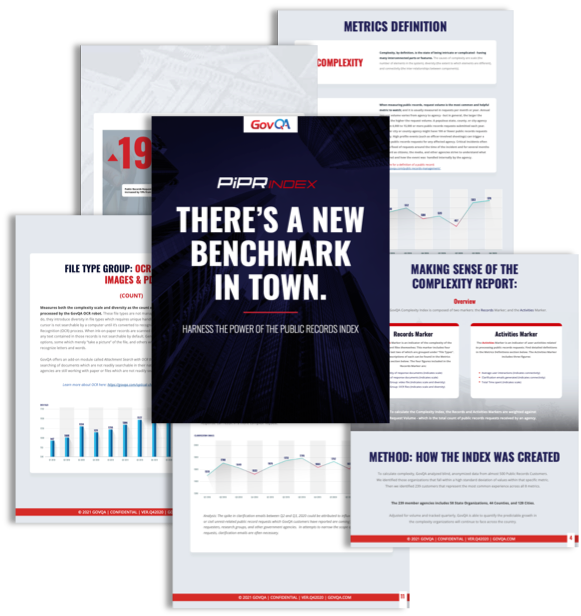 Register for the Webinar
Explore the PiPRIndex