By Nicole GlasheenApril 6, 2022No Comments

Many states are taking this Legislative Session to reevaluate laws around the public’s right to access certain records. While some states look to expand transparency efforts, others work to keep records close to their chest and out of the public’s hands.

[The week of March 28] Elouise McDaniel, an 82-year-old Irvington resident was sued by the township for various reasons, including filing over 75 requests to the township for information within three years via New Jersey’s Open Public Records Act.

On Thursday [March 31], she learned the township’s intentions to drop the lawsuit — just a day after McDaniel had secured an attorney.

“We look forward to Irvington dismissing this case, but it shouldn’t have taken national press coverage and the ACLU stepping in for them to back down,” McDaniel’s attorney, CJ Griffin, who took the case on pro-bono Wednesday [March 30], said in a statement sent to NJ Advance Media. “This law(suit) should never have been filed in the first place — it was clearly an attempt to keep Ms. McDaniel from being civically engaged and ‘checking under the hood’ of her local government to make sure everything was operating correctly.

Responding to the “voluminous OPRA requests has been unduly burdensome, time consuming and expensive,” the township said in the Sept. 17 civil suit, first reported by NBC.

Whether you are new to your records management career, or just beginning at a new location or position, this is good information to get started. If you are a records manager seeking to break out of the corner you’re so often put into, consider this painfully gained wisdom that you could use to your advantage. There is no one simple right or wrong method. Simply stated, when you begin, you don’t know what you don’t know…. but you must learn quickly. 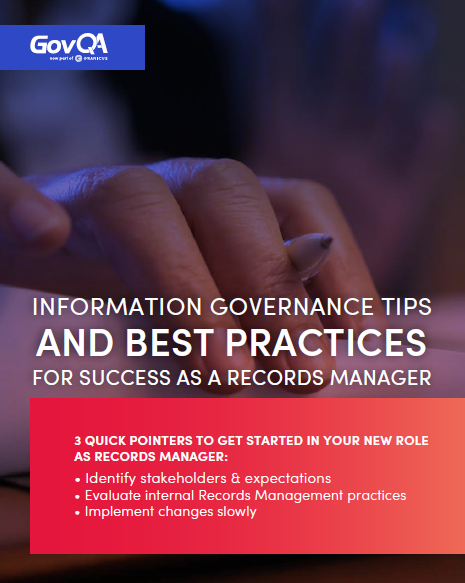 A bill to exempt booking photos from public records has gained approval from lawmakers on the Louisiana House and Governmental Affairs Committee and now moves to the full House.

Committee members voted 11-1 to approve House Bill 729, sponsored by Rep. Royce Duplessis, to exempt mugshots from public records and prevent the media from publishing booking photos before a person is convicted.

Duplessis told the committee Wednesday [March 30] the bill provides exceptions “if the person is deemed a fugitive” or poses “some imminent danger to the public.”

The bill, introduced by State Rep. Keith Gillespie would require legislators and staff in both the state House and Senate to post their expenses online on a quarterly basis, including reimbursements for meals, travel, office furniture, and overnight stays in Harrisburg.

That expense information, according to the bill, would be searchable and would have to include the reason the expense was incurred, who incurred it, and which legislative account was used to provide the reimbursement.

A bill that would make it more difficult for the public to get access to “pre-decisional” government records is quietly dying in the state Senate, but lawmakers want to establish a working group to consider when those records should be made public, and when they should be kept secret.

Senate Judiciary Chairman Karl Rhoads said Tuesday [March 29] he will not hold a hearing on House Bill 2303, which means the measure will fail this year.

That bill would have amended the state open records law known as the Uniform Information Practice Act to specifically allow public agencies to keep secret certain “drafts, internal memoranda and correspondence” and other “pre-decisional materials” that are part of the agencies’ internal decision-making processes.

In both cases, the state Supreme Court referenced arguments the Reporters Committee made in friend-of-the-court briefs urging the court to make the records public.

The two cases concerned particularly egregious reports of misconduct by law enforcement officers in New Jersey. In the case decided first, Libertarians for Transparent Government v. Cumberland County, the state Supreme Court ordered the release of a settlement agreement reached between Cumberland County and a corrections officer who had been accused of sexually abusing a female detainee, holding that the record was subject to disclosure under the state’s Open Public Records Act. In the second case, Rivera v. Union County Prosecutor’s Office, the court concluded that information from an internal affairs investigation into a police department director’s use of racist and sexist slurs must be released under the common law.

Though the court ruled in favor of disclosing records on different legal bases, both rulings are an important step toward increased transparency in government, especially law enforcement.

Read More | Reporters Committee for Freedom of the Press

3 Quick Pointers to Get You Started