Is That Covered Under Your Right-to-Know?

As we move into the new year, the same question around access to public records remains: Do you have a right-to-access that government communication/information under current public record laws?

The Illinois Supreme Court has ruled personal injury lawyers on the prowl for new clients don’t have a legal right to force police departments to turn over traffic crash reports containing full contact information for everyone involved in traffic accidents.

The court ruled police departments and other local government bodies do not have the authority under the law to waive individuals’ rights to keep their personal information private.

Anthony Mancini, of Mancini Law Group, through his lawyers with the Chicago firm of Loevy & Loevy, sued the Schaumburg Police Department in October 2017 in Cook County Circuit Court, accusing it of violating the Freedom of Information Act by improperly covering up – or, redacting – certain information when granting his request to produce two weeks’ worth of police crash reports. 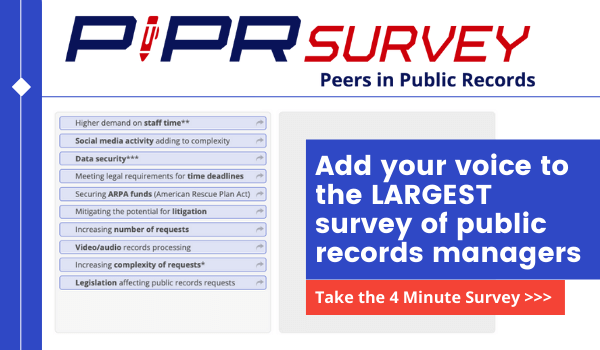 A Los Angeles County Superior Court judge has temporarily blocked the Inglewood Police Department from destroying records just ahead of a new transparency law that went into effect Jan. 1 in California.

The ruling comes three years after the city was thrown into controversy over its handling of law enforcement documents.

In late 2018, the city of Inglewood destroyed hundreds of police records in the weeks before Senate Bill 1421 went into effect. The law expanded public access to police use-of-force, misconduct and disciplinary records for departments across the state. Critics argued Inglewood sought to destroy years of investigative records involving police dating to 1991 just ahead of the new law, a claim city leaders rejected.

“This premise that there was an intent to beat the clock is ridiculous,” Inglewood Mayor James T. Butts Jr. said at the time.

Maryland Gov. Larry Hogan has long used electronic chat rooms that destroy messages in 24 hours to communicate with state employees, records show, allowing his inner circle to keep communications beyond the reach of the public, state archivists and history.

The app the governor and his staffers have been using, called Wickr, markets itself to government agencies and others seeking security from foreign and domestic cyberthreats. The platform in practice has provided Hogan a forum to complain about media reports, direct pandemic response and coordinate with top staffers.

Many states, including Maryland, have yet to reckon with technology that transparency advocates say allows officials to violate at least the spirit of open-records laws. That’s in part because of the difficulty of proving that officials are using the apps and the greater difficulty of seeing what’s being communicated.

A new lawsuit on behalf of three Iowa reporters and their news organizations seeks to pry long-sought public documents from the office of Gov. Kim Reynolds.

The suit was announced by the American Civil Liberties Union of Iowa. It alleges that Reynolds’ office has delayed responding to records request regarding COVID-19 and other policy issues, in some cases for more than a year.

“Unfortunately, this enforcement action has become necessary because the governor’s office has shown a troubling and really persistent problem of simply ignoring many of the open records requests filed with them, even, as here, by reporters with wide audiences and reach doing important work in the public interest,” ACLU Legal Director Rita Bettis Austen said in a press conference Thursday [Dec. 21].

42% of people say that a lack of perceived transparency from police has hurt their opinion of law enforcement over the last five years. 62% say serving as a local police officer has become more difficult. This is according to a national survey conducted by our partners at Veritone.

On December 14th GovQA hosted a panel discussion in which we covered the impact and application of this 3000 person survey and other data sources on those choosing technology to manage requests for law enforcement records.