There has been a lot of movement in the world of Public Records, from new legislation, to a new form of funding, check out what you missed…

Oregon lawmakers approved a bill Wednesday [June 23] that delegates the responsibility to hire and fire the state’s public records advocate to the 11-member council that was established to advise the position when it was created back in 2017. It effectively removes the potential for the advocate to be influenced by any elected official.

The public records advocate’s job is to mediate records disputes between state and local government agencies and records requesters, provide training to public employees who act as records custodians, and act as the leader of the Public Records Advisory Council (PRAC).

Senate Bill 500 — which passed unanimously in the House and 28-1 in the Senate — deletes language in the 2017 bill that established the office that gives explicit hiring and firing authority to the governor with confirmation by the Senate.

Some bills won’t make it to the finish line before Delaware lawmakers complete their work on June 30th.

That includes Senate Bill 155, [sponsored by State Sen. Kyle Evans Gay], which would make changes to the state’s Freedom of Information Act – changes that raised alarms with open government advocates.

The Freedom of Information Act provides the public a tool to access government documents. And Gay’s legislation seeks to make changes to Delaware’s version, including clarifications to the appeals process if a FOIA request is denied.

Two sentences in the bill alarmed open government advocates. They allow a government agency to deny a request construed to be abusive or disruptive.

Gay is offering an amendment requiring agencies to provide a factual reason denying a request as unreasonable. But the concerns raised prompted her to put the bill on hold until next year.

Senate Bill 10, sponsored by Republican Sen. Lana Theis from Brighton, will amend the Open Meetings Act. The Act originally allowed the public to read meeting minutes on veteran service committees because they are a governmental body.

Bill 10 now allows for the veteran services to have a closed, private meeting to interview a veteran and their family regarding an application for benefits or financial assistance.

“People have a reasonable expectation of privacy, especially when it concerns personal and sensitive financial, medical, and other health information,” said Sen. Theis.

Why does the Orange County, CA Sheriff destroy misconduct files after 5 years?

Thanks to a recent state law, the public now has a right to see investigation files about police officers who were found to have committed serious misconduct – including lying, wrongfully killing someone, or sexual assault.

But if you ask the OC Sheriff’s Department for anything older than a few years, you’re largely out of luck.

Sheriff officials have a policy of destroying their misconduct records after five years – with narrow exceptions if there’s a legal hold or pending records request.

It’s the bare minimum they’re required to keep the documents under state law.

Free eCourse – ARPA and public records
This 8-part eCourse will provide resources to help you convince others in your organization of the value of investing in a public records solution using ARPA funds.

To keep up with the pace of increasing volume and complexity of public records – you are going to need to modernize your technology and deliver more government services – like public records – digitally. 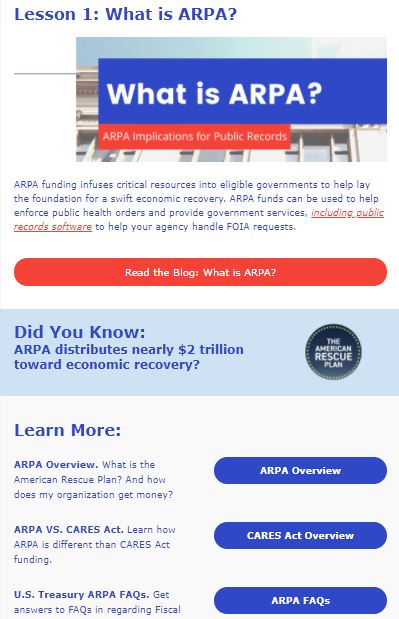