Public Record Requests are on the Rise, is Your Agency Ready?

This week’s Public record happenings: Hidden records, surcharges and loopholes. How have the unforeseen events of the past year impacted your agency’s priorities for the 2022?

Moab, Utah is returning the nearly $3,000 in fees the city collected from multiple media organizations to release body camera footage of officers pulling over Gabby Petito and her fiance Brian Laundrie outside of Arches National Park.

The move to refund the fees comes after The Salt Lake Tribune asked for an explanation of the costs, which appeared to violate Utah law. Agencies can only charge for “actual costs of providing a record,” public records law states.

“Even if one person were charged a fee,” city spokesperson Lisa Church said, “once that document is created, everybody else should not have been charged.” 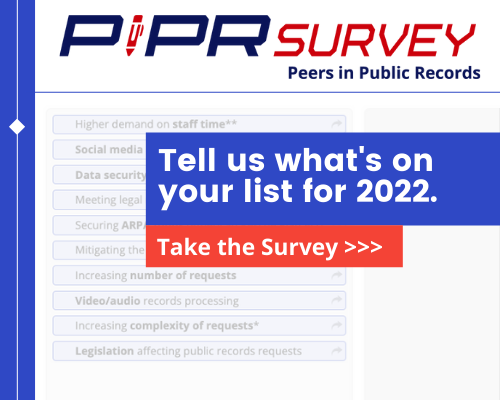 [New York Governor] Hochul made public recusal policies she, along with Lt. Gov. Brian Benjamin and top aide Karen Keogh, signed off on.

In a marked change from previous administrations, state agencies will no longer be required to send FOIL responses to the Executive Chamber for review. Instead, FOIL requests will be processed directly through an agency’s general counsel.

Agencies will also be required to take immediate steps to identify and publicly post frequently requested documents and documents that have public significance, so interested parties can find relevant information without needing to file a FOIL request.

The Prince George’s County Police Department has refused to disclose police misconduct records, despite a new [Maryland] state law that was intended, according to its sponsor, to open such records to the public and the media.

Lawmakers and advocates for the legislation, known as Anton’s Law, said its intent was always for public disclosure of these records, which were previously hidden from the public.

Prince George’s Associate County Attorney John Mitchell denied the request, writing: “There is a common misconception that these records are now open for public review. That is not actually true.”

The office of Delaware’s embattled state auditor violated the state’s Freedom of Information Act over a period of several years by failing to properly maintain logs of public records requests, the attorney general’s office has determined.

In an opinion issued Monday [Oct. 25] in response to a petition from The Associated Press, the Department of Justice found that the Office of the Auditor of Accounts, or OAOA, failed to maintain its FOIA logs as required by law over a period of more than three years.

The FOIA violation stems from a request submitted by the AP in early September for the auditor’s FOIA logs from 2018 to the present.

Under Delaware law, public bodies are required to maintain logs documenting the public records requests they receive. The information that must be tracked includes — at a minimum — the submission, review, response and final disposition dates, the response deadline, and the requesting party’s contact information.

The Prince George’s County Police Department has refused to disclose police misconduct records, despite a new [Maryland] state law that was intended, according to its sponsor, to open such records to the public and the media.

It is no secret that government agencies have long been short on resources, including staff. As the number of FOIA requests rise, government staff members are being stretched in more directions than ever before. This increase in request volume takes employees away from other higher priority agency projects and can create backlogs in not only fulfilling requests but in managing other projects.

Properly trained staff keep operations running smoothly and efficiently. But a streamlined agency requires so much more than just basic employee training. Every employee working with FOIA requests should be aware of these best practices in public records, which work well in agencies of any size.